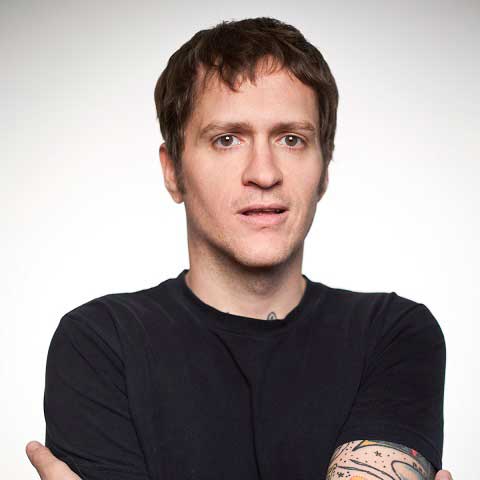 Ben Roy is one of the fastest rising stars in the comedy world. Ben and his Grawlix comedy troupe created and starred in “Those Who Can’t,” a TV show for TruTV. Ben’s comedy album “I Got Demons” was released in 2012 and was featured in LaughSpin’s top comedy albums of the year.
Ben was also featured in the book “Mock Stars: Indie Comedy and the Dangerously Funny,” alongside comedy greats Patton Oswalt, Maria Bamford, and Fred Armisen, author John Wenzel described him as, “gloriously erratic, mixing Louis Black’s quivering indignation with Bill Hicks’ vitriol and David Cross’s unapologetic misanthropy.” The Onion A.V. Club said “he’s like a skinny, punk-rock Sam Kinison.”

In 2010, Ben performed in the Just For Laughs Montreal “New Faces” showcase and received high accolades for his performances. He was invited back to the festival in 2012 where he taped a “Funny As Hell” set for HBO Canada. In 2013, Ben was also given his own one-hour shows at the New York Comedy Festival and the Just For Laughs Toronto Festival and made additional TV appearances on Nickelodeon’s NickMom Night Out and AXS.TV’s Gotham Comedy Live. Ben is also a member of popular pop punk band, SPELLS, as well as a father and husband. He currently resides in Denver, Colorado.